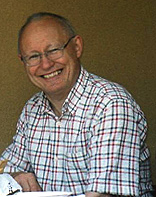 José María Buesa was born 1949 November 25th on Jaca (Huesca). He studied Medicine on Zaragoza University and finished his residence on internal medicine on the General Asturias Hospital on 1978, one of the foremost active centers of that moment. During his residency he went through the Oncology Service that was starting its labor.

Convinced of where he wanted to go on his career, he got a scholarship to work on the Oncology Laboratory of the National Cancer Institute at the Netherlands. He worked on Utrech and Amsterdam between 1979 and 1980, finishing his Doctor thesis under the tutelage of the professor HM Pinedo. eventually he returned to the General Asturias Hospital, working for the Oncology Service as assistant physician until 1987. On 1988 he moved to San Sebastián, in charge of developing the medical oncology service from his first superior.

He eventually returned to the Oncology Service of the Asturias General Hospital, as Section director. After a while, he got the post of Director of the Research Unit of Clinical Oncology of the Prince of Asturias University Institute. (IUOPA by its Spanish acronym).

Jose María was a strict scientist, committed to his patients and warm with his friends. His style was more akin to sow than to bloom, placing all his efforts in helping the beginners, trying to remain more in the background than in the spotlight.

Although he did make an impact in several oncology areas, it was the sarcoma the one he put more effort in; So, he was a very active membet of the Soft Tissue Sarcoma and Skeletal Tumors Group of the European Organization for the Treatment and Research on Cancer (EORTC by its Spanish acronym), working as one of the main recruiters for the group's clinical trials and directing several studies marked as milestones in the history of medical treatment of sarcoma. This was one of the constants during his professional years: always publishing the results of the studies in which he participated as main researcher or associate. More than 50 journals signed by him bear witness.

In 1994 he founds the Spanish Group of Sarcoma Research (GEIS) alongside Andres Poveda, Antonio Lopez-Pousa and Javier Martin. His goal was and still is to involve the sarcoma specialists from all across Spain in education and research activities, that back then were barely present on international fora and seminars.

Today GEIS hosts dozens of specialists and hospitals and has a regular presence in the sarcoma publications with the largest international impact.

He died in 2007 January 7th from lung cancer. although as an oncologist he was completely aware of the fate that awaited him due to his diagnosis, he kept working till the last moment. He continued attending his patients, went to GEIs meetings and gave finishing touches to the publication of the last GEIS clinical trials that he was able to see. His GEIS companions have an everlasting memory of his humility, his clarity, his commitment, his huge ability to overwork and his rejection of flattery. Every year, we honor his memory on the way we know he would had liked more, promoting a little bit more the advance in the treatment of sarcomas through the Commemorative Scholarship of Oncological Research José María Buesa.