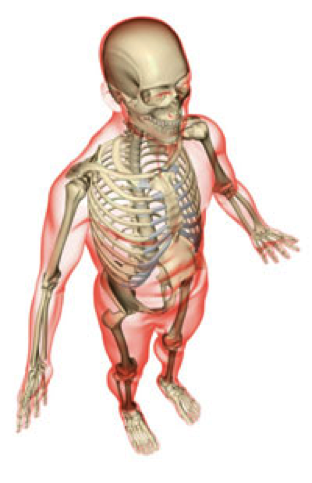 Cancer affects frequently the skeleton. However, only a small portion of malignant tumors on bones are sarcomas. Most of them are metastasis or common cancer ramifications not related to sarcomas, as breast, prostate or lung cancer. For example, a woman could develop breast cancer and some of the malignant cells of that tumor might peel off, get into the circulatory system and through it, arrive to some place of the skeleton, where the cells would nest and multiply, and finally create secondary tumors. Certainly, that woman would have bone cancer, but not a sarcoma. If a pathologist would examine a sample of the metastasis with the help of a microscope, he would discover that the tumors were composed by cells similar to those present in the mammary gland.

Causes of osteosarcoma are still unknown. In some adult cases, the sarcoma takes advantage from previous radiation therapy treatments or other bone-related diseases, like Paget disease. On children and teenagers, sarcomas are linked to growth stages and to the regions where bones grow longer quickly and actively. This kind of cancer is not hereditary.

When sarcoma appears on limb bones, the most common symptom is a lump. On the most aggressive bone sarcomas the lump grows quickly turning into a real tumor and alerting the patient and his/her primary physician that it is something serious. Other times, however, sarcomas behave in a more concealed way, growing slowly, sometimes for months or even years. Most of the skeletal sarcomas cause acute pain since a pretty early phase of its development. As children and teenagers are common patients, it is commonplace that neither the doctor, nor the patient or his family considers cancer as a possibility to take into account, and that can delay an accurate diagnosis. Any painful lump near a joint that has appeared in a child or teen patient carries a high probability of being a sarcoma, and as such must be sent to an expert in this kind of disease.

To diagnosie any sarcoma a biopsy is needed, meaning to obtain a little fragment of the malignant tissue to be observed on the microscope. The specialist in charge of confirming the diagnosis is the pathologist. Even although the patient may never meet this doctor, the role of the pathologist is crucial on any sarcoma team or unit, and the fate of the patient depends on him as much as on the oncologist or the surgeon. Sometimes, sarcoma diagnosis is simple, just needing to dye the tissue with a couple of special colorants, cut it in a extremely thin sheet and look at it under the microscope. Other times, though, things are not that easy and it is required to use dyes with antibodies or even gene analysis of malignant cells DNA. A simple sarcoma diagnosis can be achieved in a couple of days by most pathologists, but it is not uncommon that more complex cases end taking one or even two weeks of biopsy work.

Any painful lump near a joint that has appeared in a child or teen patient carries a high probability of being a sarcoma, and as such must be sent to an expert on this kind of disease.

The pathologist not only confirms the existence of sarcoma, but also points exactly which of the hundreds of possible types it is, how aggressive it is and, after its final extirpation, needs to be sure that the extirpation margins are clean of malignant cells. Surgeons and oncologists can only select the best treatment for each case if they have an accurate pathological diagnosis. This is so important that, when a patient that has already received a diagnosis checks with a sarcoma specialist to get a second opinion, first thing that is required is the biopsy so another pathologist from his team can analyze the sample again.

Not all the skeleton is composed of bones; on its composition there’s also the fibrous tissue and the cartilage, which gives a certain degree of elasticity to the bones. That is why there are three main kinds of sarcoma:

Osteosarcoma or bone sarcoma is the most common kind of skeletal sarcoma, to the point that is even used as a synonym. It is a cancer that usually appears during childhood and teen years. Many of them appear during the period of most active growth and usually near the knees. When an osteosarcoma appears on an adult, it almost always does on a bone that has been object of radiation therapy or suffered some previous upheaval, like Paget’s disease.

Chondrosarcoma and fibrosarcoma appear on older patients than osteosarcomas, mostly young, adults or elderly. These are usually diagnosed on areas next to the axis of the body, like the pelvis or the spine.

Apart from osteosarcomas, chondrosarcomas and fibrosarcomas, there are other rarer kinds of skeletal sarcomas like, for example, clear-cell sarcoma, which tends to appear on the hands and the feet; or chordoma of the sacrum. Also, skeletal sarcomas might appear under the shape of sub varieties whose behavior and treatment differs from its main variant. As to give a couple of examples, osteosarcoma of the jaw has a small tendency to spread as metastasis, and as such might not need chemotherapy that is essential on other cases; or the osteosarcoma known as periostal, which can be cured with less invasive surgery than the ones needed for the most common varieties. If a surgeon or an oncologist only gets to treat one or two cases of osteosarcoma each year, he will never get the chance to treat one of these even stranger kinds. It is not a surprise that some specialists are not aware of the existence of the peculiarities of these infrequent forms of sarcoma, peculiarities that might be crucial to choose the best treatment possible. That is why it is so important that patients with skeletal sarcoma (or even with the suspicion of having one) reach a team really expert on handling these tumors.