As there are many kinds of sarcomas, there are also many kinds of diverse treatments to cure them or improve the situation of the patient. The main ones are surgery, radiotherapy and chemotherapy. 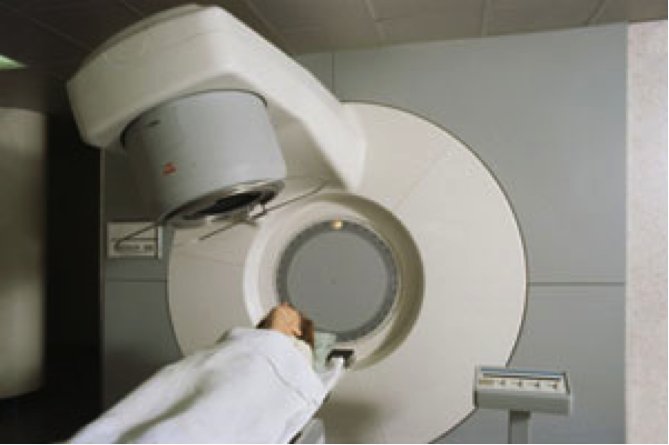 On many cases where a few years ago the amputation of a limb was unavoidable, it is now possible to treat them safely just extirpating the tumor and radiating the zone. On the other hand, on some sarcoma cases it is impossible to find acceptable healthy tissue margins due to the proximity of vital structures that cannot be touched. This situation is present mostly around the neck or in the pelvis. Radiotherapy is the only way to try to avoid a relapse on cases in which the only available surgery is marginal.

Finally, radiotherapy is also useful to soothe the symptoms of a incurable sarcoma. It is known as palliative radiotherapy and is used, for example, to calm the pain of bone metastasis or to stop the growth of those inside the brain.

The medical specialist in charge of the treatment with radiation is the radiation oncologist, other than the medical oncologist who uses chemotherapy and other treatments with medicines. For radiotherapy, some devices called electron accelerators are required. Accelerators are great teams that need to own buildings within hospitals.

Radiations are beam power acting on tissues. Its main effect is to damage the genetic material of cells.

Radiations are beam power acting on the tissues. Its main effect is to damage the genetic material of cells. If the genetic damage goes beyond a certain point, the cell dies. This happens to both healthy and sick cells, but the oncologists use a number of techniques to make the maximum effect of radiation on the tumor, but minimum on normal surrounding tissues. The first thing is the exact calculation of the dose. It happens that malignant cells are more sensitive to radiation than healthy cells. The specialist estimates a tolerable dose for the healthy tissues, but lethal for the cancerous ones. Another important aspect is the so-called fractionation. The total dose of radiation is not given at once except in rare exceptions. Usually they use fractionated-dose, so that the tissues have a chance to recover between one and another fraction. The most common is to apply a dose of radiotherapy every day from Monday to Friday, for a period of several weeks. Furthermore, the radiation oncologist does not project one single beam of radiation on the cancer. What it does is to use several beams of energy that intersect precisely on the tumor. In this way, each Jet of radiation carries little power and harms sparing healthy tissue that goes through in his own way; However, the radioactivity of all bundles added at the point of Confluence exerts all its effect at the outbreak of the disease. Finally, screens of a special material that absorbs radiation, molded tailored to each patient's Anatomy to prevent the radiation from getting to an especially sensitive place, such as the spinal cord, retina, or gland tissues used thyroid.

Some of the most modern equipment of radiotherapy uses powerful computers, systems of image recognition and virtual reality to accomplish tasks that until recently were impossible to accomplish, such as homogeneously wrap in radiation very irregular tumors or matching the movements of the patient's breathing. Sarcomas, especially of the trunk, the spine, the neck and face are tumors in which this kind of complicated techniques involve a substantial difference in terms of the effectiveness of the treatment or control of adverse effects.

All these aspects are hard to plan. Before the radiation therapy starts, the oncologist orders a series of special scanners and a session with the radiotherapy unit switched off. This is called simulation, and is omitted only in rare situations, in which radiation is a medical emergency. In every radiation oncology team, some professionals with who he never gets in contact with participate. They are not doctors, but physicists. They are known as radio physicists. Along with the oncologist, they analyze all the simulation data and establish a different treatment plan for each patient, specifying which components will be used, with which radiation energy, through how many bundles of energy and what precise angles each, how many sessions, for how long and using what shields to protect which organs. All those data are entered into a computer which controls radiotherapy apparatus.

Radiotherapy is better tolerated than chemotherapy in most of the cases and the procedure itself of receiving radiation differs a little from going through a resonance.

It is true that radiation scares many people, probably because the idea of radioactivity is mixed with images of nuclear power plants, atomic bombs and so on. Reality is far from these fantasies. Radiotherapy is just another one among many medical treatments. Those who receive it tend to tolerate it very well, without any adverse effects, or with just small consequences that are solved soon and barely interfere with normal life. Radiotherapy is better tolerated than chemotherapy in most of the cases and the procedure itself of receiving radiation differs a little from going through a resonance.

To begin, it is a local treatment. It is applied in just a part of the body, while the rest of the body is protected from radiation. This is the reason why the adverse effects of this treatment are almost always local. They do not affect anything but the place where it is applied.

The most common radiation therapy counterproductive effects are acute, i.e., they appear during the same treatment or shortly thereafter, and disappear soon. For example, radiotherapy in the head produces the fall of hair. Radiation therapy administered over the mouth can irritate it and make out sores called ulcers. Neck or chest radiation can lead to transient inflammation of the esophagus, which is perceived as pain when swallowing. Irradiation of the arms and legs, which is the most common in the case of the sarcomas, does not cause more discomfort than skin irritation.

The effects in the medium and long term, are way weirder and even more permanent. Although we have said that the consequences of radiation therapy are local, some people complain of general tiredness, which slowly gets better and disappears after one or two months. When radiotherapy is given on areas of the spine or pelvis, it can temporarily decrease the blood cells, such as white blood cells, red and platelets